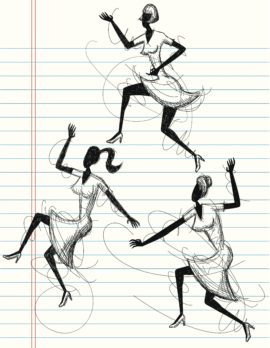 And then this happened…

To the shy little dancer it seemed leaders and followers all around her were nodding and saying things like, “Easy!” and “Simple!” Personally, she didn’t think what she had just seen was in the least bit simple. Most of it, she couldn’t even remember.
When her fretting had subsided just a smidge (the equivalent of not much), the shy little dancer realised her beloved leader, Mary-the-Magnificent (a Rio Rhythmics instructor), had been whisked to the far end of the studio to work with the other leaders. Juliana had shepherded the followers to work at the opposite end of the studio. The shy little dancer arranged her face into a brave expression and joined them.

Juliana ran through a part of the sequence. She ran through another part, and then another. Dancing solo, the followers flowed.

The shy little dancer, meanwhile, was doing everything BUT flowing. She was missing her “ups”. She was making a shambles of her “steps-and-turns”, and she was forgetting her “S’s”.

As the other followers worked on positioning their shoulders, on angling their backs, and on pushing into the floor, the shy little dancer’s brain flooded, filled, and overflowed. She stopped and watched the others for a bit, then decided her stopping-and-watching made her most uncomfortably conspicuous. For the rest of the session, her dancer-brain (fluffed and full of feathers) gave only gobbledygook. Her body (unable to understand what her brain was saying) responded by “arriving” when it should have been “going,” and by “going” when it should have been “arriving.”

“Oh,” the shy little dancer thought, as her first zouk choreography training session finally drew to a close. “Oh, dear,” she thought as she left the studio and found her car. She opened the door. She pulled out her mobile phone and watched the video she had recorded of that day’s sequence. She watched it again. “I better practice,” she told herself. “Lots.”

This shy little dancer (a.k.a. Linda Brucesmith) has enrolled to perform as part of Juliana and Rafael’s zouk choreography at Rio Rhythmics’ 25th Anniversary Ball on June 29. Just setting down the words makes her flighty as a sparrow. This is the second instalment of the story of the shy little dancer’s first dance performance. Follow her blog. (And keep your fingers crossed.)

Linda Brucesmith is a writer and public relations consultant based in Brisbane. She managed Rio Rhythmics’ marketing from 2003-2008 and has danced with the Academy ever since.

Join our Latin Dance Community
For notifications on Latin related events, NEW courses and to receive insights into the wonderful world of Latin dance, join our list. Receive a double pass to our weekly Latin Mix party valued at $28!


We Respect Your Privacy: No Spam and you can Unsubscribe at any time. Enrol Now

If you would like to chat with our team any time give us a call on 3844 1824 or send us an email to dancing@riorhythmics.com.au.

February 22, 2019
The first performance: A shy dancers story – Chapter 3How to ‘convince’ your partner to do Latin dance classes with you.

Sign up for an Intro Course & get BONUS unlimited access for your first 5 weeks*
May 17, 2021
Topics
Monthly Archive